And I'm amazed every day

With Valentine's Day approaching, Cocoa has invited us to share our story - how we met, how we decided this was "meant to be".  So I dug through the albums and scanned a few pictures and laughed at how long my hair was and how young we both looked.  Humorously, neither of us is big on the whole Valentine's Day celebration.  In 18 years, I think we've gone to dinner once, exchanged cards (not gifts) twice, and never purchased roses.  I wonder if he realizes just how much money I've saved him in roses over the years?  I think I deserve a fabric buying spree :) 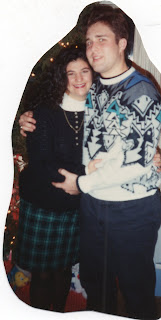 Christmas, 1991
We'd been dating for about 3 months
That sweater reminds me of the Cosby Show!
After attending an all-girls' high school in New Orleans, I found myself on a college campus in the Southern "Bible Belt" taking engineering classes with....boys!  No, I mean, college guys!  I spent most of my first quarter (our school worked on quarters rather than semesters) discovering the joys of make-up application, hairstyles that didn't involve a ponytail in the back, and how to match shoes to outfits.  Sadly, I never did figure out the shoe part and, 20 years later,  I own less than 10 pairs.  Again, thinking here that I have saved Mr. Neoclassic major bucks over the years.  He is so lucky to have me.

Even with all the make-up and hair styles, I rarely dated.  I chose to hang out with the Catholic Student Center crowd and did all my socializing in large groups.  As an engineering student, I spent lots of time studying and befriending lots of my guy classmates.  But not dating yet.  Toward the end of the first quarter, my English professor called me up after a class and handed me an application for the campus entertainment board - Union Board.  She was convinced I was the perfect candidate for this board and interviews were coming up.  The entertainment board was responsible for booking concerts, comedians, and vaudeville-type acts for student entertainment, as well as planning and executing all the dances, campus parties and formal nights.

I submitted my application and set up an interview.  When I arrived for the interview, I was greeted by a young guy with a curling mop of hair and an "all business" attitude.  He pronounced my name incorrectly and I corrected him, for the benefit of the others in the room.  [My name is Gaelic].  And that was how we met - in the winter of 1989.  I joined the Union Board and became very active, even holding a "position of power."  I got paid (chump change) to book comedians for the campus.  I wish I had that job now!  Anyway, Mr. Neoclassic was also active and held one of the other committee head positions.  We interacted and were friends, but we circulated in different crowds.  I didn't know he'd originally thought I was too pushy for immediately correcting the pronunciation of my name and he didn't know I thought he was a too geeky for actually enjoying some those engineering classes.  Mr. Neoclassic was a year ahead of me, but while I was in civil, he was in electrical.  And those guys just don't think the way we do.  Uhm, they still don't :)

Fast forward two-ish years.  We're still both on the Board and interacting, but have dated other people (not seriously) along the way.  During the summer of 1991 we both attended the summer session.  He'd joined the Naval Nuclear Engineering program and he had to finish within four years.  I was there because that I wanted to lighten the course load for the coming year.  Mr. Neoclassic had just moved into an off-campus-but-within-walking-distance-apartment, so his place became the hang-out for all the Union Board members there that summer.  We kept each other company, played a lot games, and ate his cooking.  (I should have scooped him up and claimed him then....he could cook at age 20!)

This is where it gets funny.  In an "I can't believe I was really that dense" sort of way.  Apparently, Mr. Neoclassic had decided he was interested in me - as more than friends.  But I didn't realize it.  I didn't notice that, as the summer wore on, sometimes it was just me invited to eat.  We were friends, right?  And he had not-cafeteria-food.  I remember telling my mother about having dinner with him one evening before we met other friends for an activity.  She asked if we were dating.  "No, we're friends.  The whole group of us this summer has really gotten close."  She actually laughed at me. 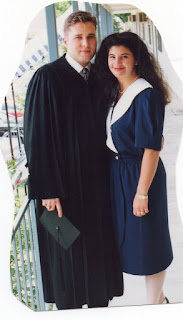 May, 1992
Mr. Neoclassic's graduation days before leaving for OCS
Too bad you can't see the awesome two-toned heels!
When I returned from the break and started the new fall quarter, he called and asked me out to dinner.  At a restaurant in the closest "real" city - 35 minutes away.  My room-mate actually looked me in the face and informed me that this was, in fact, a date.  It involved a phone call, him picking me up, a meal, and a whole car ride home for conversation.  It was September, 1991, and we were officially (according to me) dating!

I think I will end this chapter and wait for another post to continue the dating [officially] saga.  I have really enjoyed the trip down memory lane.  Except for the hair-do's and clothing.  My children have especially enjoyed the pictures of us from our college years.  To quote Zydeco, "wow, you don't look anything like that now!"  Thanks?

Posted by WaterWorks at 9:58 PM