I fell in love with the pizza girl

I think I've hit a new low.  I just used a Jonas Brothers song for a post title.  It was that or start y'all singing "when the moon hits your eye..."  You can thank me later.  Or not.

My sister-in-law requested my pizza crust recipe and I thought I'd share it here.  I was hoping to have pizza pictures as it's Friday and that's my usual Friday meal, however both boys had braces installed (applied, attached?) yesterday.  Pizza crust is a little to much for their still tender teeth.  So here's a shot of the bread dough I started because I know a blog post is better with a picture. 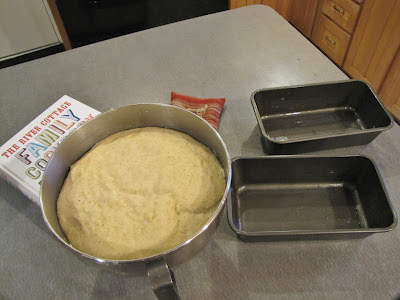 I like the River Family Cottage loaf recipe.  I use half white and half whole wheat flours.
The crust recipe I use was given to me a year or so ago by a good friend.  He worked in a pizza parlor during high school (or college) and this recipe was the one that most reminded him of those crusts of old.  (Not that you're old, Drew, just the crusts).  The recipe is from Cuisinart, but I've not seen it in print.  I am just giving credit where it's due.
Pizza Crust:
Starter -
3 1/4 tsp yeast (that's one package + 1 tsp)
1 1/4 cup water (about 110F)
1 tsp (approx) of honey or brown sugar [the recipe doesn't call for this, but I find the yeast foams better if you feed it a little sugar]
Mix the above together with a whisk and set to foam in a warm place for about 10 min.
Dough -
3 1/3 cup bread flour (or King Arthur White or Mix of 1/2 White and 1/2 Whole Wheat)
1 1/2 tsp Kosher salt
3 tsp olive oil
With dough hook attached, put 3 cups flour mixture and salt into bowl of stand mixer.  Add foamy yeast concoction and olive oil while blending on low.  As the flour is absorbed, turn mixer to medium and add flour until it forms a ball and pulls away from the sides of the bowl.  I like mine a little bit on the wet side.  Knead with the dough hook for about 3-5 minutes.  Turn onto lightly floured surface and hand knead a few times. Coat the mixer bowl with olive oil, toss in the dough, roll to coat and cover with plastic wrap.  Set bowl in a warm place (I use the top of the dryer or a warmed oven).
One to one and a half hours later, punch the dough down, then turn the dough out onto the floured surface.  Knead a few times and half the dough.  You should be able to form two 12 - 14 inch crusts.  Place on screen, stone, or pan.  Top it your way!  Bake at 450F for about 10-12 minutes, depending on type of pan.

I usually double the recipe.  I can get two larger (12" diameter) crusts and three or four small, personal size pizzas.  The younger children really enjoy having their very own small pizza, topped their way.  We create pizza sauce on the fly most nights by just using canned crushed tomatoes and then grinding oregano and basil across it.  I also really like a no-sauce pizza creating simply by brushing the crust with olive oil and sprinkling with those ground herbs.  Then we top it any way we like.  During the summer, I really like sauteed onion and yellow squash.  It sounds odd, but is really delicious.  So is sauteed onion, spinach and mushrooms topped with ricotta cheese blobs.  Don't you really want to try a pizza described as having blobs??

Try a pizza night with your family.  It makes a mess of the kitchen but is worth it for the family time!

Posted by WaterWorks at 5:48 PM