Putting it together, bit by bit

Jazz decided that she wanted a tour of this city she's never seen. She gave her little point and shoot camera (thank you Aunt K) to her daddy and asked him to take pictures of his trip. He agreed and proceeded to spend the week shooting various airports, Miller Park, hotel lobbies, restaurants, and street views. The best shot, though, is the one that follows: 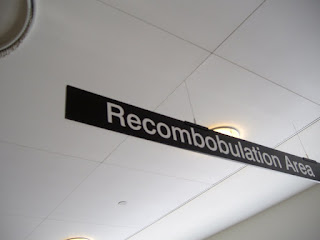 Apparently, someone in the Milwaukee TSA has an enormous sense of humor. After winding one's way through the cattle chutes of security, one is led to the Recombobulation Area and allowed to redress. After shoe removal and pocket emptying; after belt and jewelry removal and full body scans. They have an area set aside for putting it all back together - bit by bit.

Of course, I almost used "Schlemiel, schlimazel, hasenpfeffer incorporated!" We're gonna do it! (That's for you, Gwen!)

Posted by WaterWorks at 2:50 PM