There's a time to laugh

1. Classic Rock came to me with a school form for my signature. Thinking to save time, he'd completed the form and even written my name in the "printed" box. The only problem is that he spelled my name incorrectly - in two ways! I asked Zydeco, who'd wandered in by this point, how to spell my name and told him that "M-A-M-A" doesn't count. He responded with "D - uhm uhm - ear-dra."

Thanks. It's D E I R D R E for those who care. It doesn't follow any phonetics rules and has gotten me called everything from "Dear-dree" to "Dee-ed-dray". But Zydeco's rendition was hilarious.

2. Irish Jig, Jazz, and I were cruising Target aisles for a new iron and a waterproof mattress cover (somebody's in a big bed) when we passed the end cap full of Hello Kitty consumables. I discovered that Irish Jig can't pronounce the K at the beginning of words when a tiny, high pitched, but very loud, voice announced "Look! It's Hello Titty, Mama! Hello Titty, Hello Titty!"

That one got a few stares. I was too busy laughing to care. Interestingly, I've never been a H.K. fan and have none of the products. I am always amazed at what they pick up from the world around them - good or bad.

3. Jazz came home from school on Friday to report that she was not chosen for the Odyssey of the Mind team. She wasn't devastated, thankfully. When I asked who did get chosen, she had no clue. All she could say is that it wasn't her and it wasn't her buddy James. I'm laughing at the "since it's not me I don't care" attitude. In any other situation, this would really bother me since it's not all Christian. But this time, I'm thinking the attitude's a little bit of self preservation and I'm okay with it. 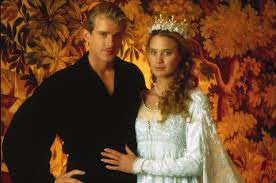 4. Sunday's first reading was the creation of man and woman from Genesis and it ended with the line:

That is why a man leaves his father and mother
and clings to his wife,
and the two of them become one flesh.

If you need to see the clip, go here. This awesome site lists great quotes. This year marks the 25th anniversary of The Princess Bride. It's our family favorite and it's quoted all the time around here. We've texted or emailed quotes, too, when appropriate. We're geeky, we admit. But it's a fabulous family film.

"Does anybody want a peanut?"

Posted by WaterWorks at 3:39 PM