If the wind is right you can sail away

Very, very early Saturday morning, I kissed and blessed Classic Rock's sweet head and waved goodbye as Mr. Neoclassic drove him to meet up with the Sea Scouts/ Venture Crew.   Mr. Neoclassic watched the Scouts load their ships and head down the Pagan River as they started their summer grand tour.

Affectionately referred to as the Pagan River Pirates, the Sea Scout "Flotilla" includes five ships and twenty-nine sailors.  The Exuberant, The Defiant, The Rampant, The Valiant, and The Cool Change will navigate their way to Ocracoke, North Carolina with several tour stops along the way.  A few hours after dropping him off, we received a text that the ships had reached the James River Bridge.  We loaded the younger children, grabbed the camera and headed up the road a bit to watch the ships cross under the bridge. 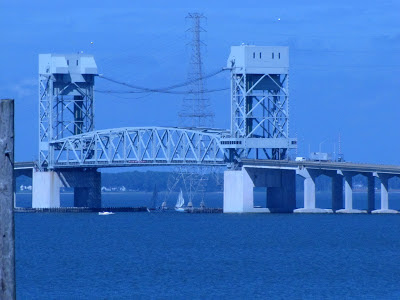 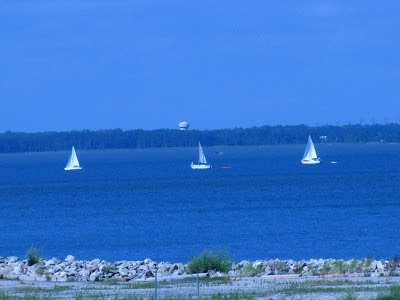 Classic Rock started the trip on The Exuberant, but apparently the sailors are moving from ship to ship as the trip continues.  Personally, I think all the teens want the opportunity to stand aboard The Defiant. Sent by one of the adults on the trip.  I just love the ship name!

Open to females as well as males, the Sea Scouts and Venture Crew units add fabulous relationship building components to the lives of these young people.  The boys and girls must work together to  plan their trips.  They learn quickly how to deal with various personalities and backgrounds, as well as how to co-exist for days without amenities.  Each sailor pulls his or her weight for sailing duties, watch, cooking, and clean up.  There's a fair amount of good-natured ribbing and trash talk, but always support and respect.

A few weeks before the trip, I made the mistake of walking through the Abandon Ship exhibit at the Mariner's Museum where I am a volunteer.  After reading several horrific accounts, I came home and made a sweeping declaration that my son would not go to sea - ever!  Lucky for Classic Rock, his father and the Scout Master were able to talk me down from the ledge.  I was assured of the hours of training, the extra planning for emergencies, and the reasonably narrow width of the waterways (they're not crossing the Atlantic, after all).  And so, with much prayer and trust, I kissed his head and sent him off.

We get a call each evening with the day's update.  I even got an "I love you, Mama" last night.  Awesome!

Posted by WaterWorks at 1:22 PM