As a child, I managed to break both collar bones, on separate occasions, before the age of three. Sandwiched in that time, I also burned both legs. I tell you this because I am convinced that every family has THAT child - the one who wears out the lamination on the health insurance card.


I was THAT child.


I have a THAT child.

His name is Zydeco. At the age of eight, he visited the ER so many times in a six month period that they separated him from us and questioned him assuming an abuse situation. I appreciate the staff's concern, but really we're just one of those families. The families that deserve a placard in the waiting room for most visits in a single year and an exam room named just for them.

Last week, he managed to slam his elbow into asphalt while playing a game at the Scout meeting. Since it was a Scout meeting, there were numerous wanna-be first-aiders to clean the abraded elbow and offer assistance with bandaging. That is, until they noticed the very swollen and not-so-symmetrical joint. They quickly and happily turned his care over to his father and the Scoutmaster. A makeshift sling was created (from a kitchen apron - I love Scouts) and ice was applied.

I received the "Hi honey, I'm going to drop Classic Rock off at home and head to the ER with Zydeco" call.  My husband's tone was very calm and soothing because he knew......

Being a good Catholic Italian mother, I said a quick Hail Mary, jumped through the shower (one must be clean at the ER), and packed a bag of snacks and water bottles. We've done this ER thing before, you know, and snacks are a must. When Classic Rock bounded into the house, I bounded out to the car reeling off directions - "unload the dishwasher; your sisters are in bed; lock the house behind me. Thanks."  I think I said thanks.  I may not have given the circumstances.  Mea culpa

Zydeco didn't realize that every person/ staff member we encountered at the ER would ask for a retelling of the accident just to ensure his story was "real" and no abuse/ cover up was involved. The fifth or sixth time he was asked, my delightfully humorous but slightly mouthy child responded with a shrug and a nonchalant, "I was attacked by rabid squirrels."  Thankfully, the x-ray tech was in good humor...

The doctor that read the x-rays, asked for the story again, and palpitated his joint commended Zydeco for his straightforward ability to answer questions and given information.   Maybe we've done this before?  She recommended a sling for two or three days and a follow up with the pediatrician for more x-rays.  The swollen joint and presence of growth plates made reading the x-rays impossible.  Zydeco noted, much to her amusement, that the sling would join our closet of emergency room supplies - so far we have the ankle boot, crutches, another sling, and various Ace bandages.

Last Friday, Zydeco and I started at the pediatrician's office.  She was unimpressed with his limited range of movement and sent us directly to the orthopedist.  Sadly, we have one on speed dial.  Three hours and an empty snacks bag later, we have a cast.  Official diagnosis is Radial End Fracture.

Even though his flag football season has been cut short and even though his arm is constantly itchy, Zydeco's really maintained a great sense of humor.  He attended the football game to cheer on his buddies and was promoted to Jr. Coach.  He's milking the I-can't-do-any-chores routine, as all good kids should. 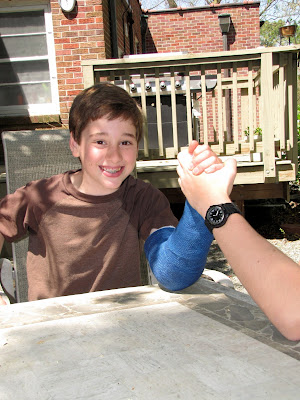 He's awesome and I love him!