To be everything I'm called to be

Light of the Eagle Ceremony

Presentation of the Eagle Award is an important and serious matter.  For the Eagle Candidate before us tonight, the award is a climax of his Scouting efforts for many years.  Let me point out that the attainment of this award is made possible through the assistance of those with the candidate tonight: troop leaders, fellow Scouts, parents, family, friends, and members of our local community.  This is an occasion for pride and joy as well as a time for reflection.   The Eagle is the highest rank that Scouting offers.   It is earned through the advancement program.  Scout Classic Rock has distinguished himself through his continued active service in Scouting.  He is trained and practiced in his leadership abilities, and he is marked by the character gained through an understanding of his citizenship and religious beliefs.  It is important that we understand the meaning of the Eagle badge. 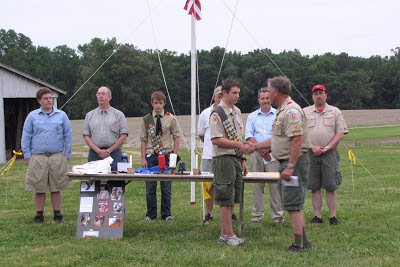 The foremost responsibility of an Eagle Scout is to live with honor.  To an Eagle Scout, honor is the foundation of character.  He knows that "A Scout is Trustworthy" is the first point of the Scout Law for a good reason.  An Eagle Scout lives honorably, not only because of the infinite importance of doing so to himself, but because of the vital significance of the example he sets for other Scouts.  Living honorably reflects credit upon his home, his troop, his church, and his community.  May the white of the Eagle badge remind you always to live with honor.

The second responsibility of the Eagle Scout is loyalty.  A Scout is true to his family, leaders, friends, school, and nation.  His loyalty to his troop and his brother Scouts makes him pitch in and carry his share of the load.  All of these help build the loyalty which means devotion to community, to country, to one's ideals, and to God.  May the blue of the Eagle badge always inspire your loyalty.

The third responsibility of an Eagle Scout is to be courageous.  Courage is a quality by which men measure in themselves and others.  To a Scout, bravery means not only the courage to face physical danger, but the determination to stand up for his rights.  Trusting in God, with faith in his fellow citizen, he looks forward to each day, seeking his share of the world's work.  May the red of the Eagle badge always remind you of courage.

The fourth responsibility of an Eagle Scout is to be cheerful. To remind the Eagle Scout to always wear a smile, the red, white, and blue ribbon is attached to the scroll of the Award, which has its ends turned up in a smile.

The final responsibility of an Eagle Scout is service.  The Eagle extends a helping hand to those who still toil up Scouting's trail, just as others helped him in his climb to Eagle.  The performance of the daily Good Turn takes on a new meaning when he enters an adult life of continuing service to others. The Eagle stands as the protector of the weak and helpless.  He aids and comforts the unfortunate and the oppressed.  He upholds the rights of others while defending his own.  He is always prepared to put forth his best. 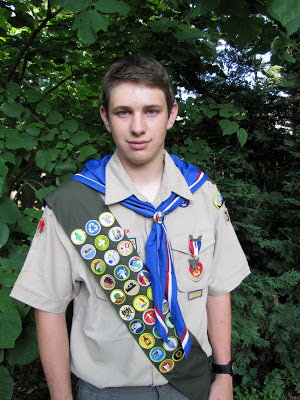 We celebrated Classic Rock's attainment of the Eagle Rank a few days ago. With his troop leaders, fellow Scout friends, and many family friends, we witnessed the Light of the Eagle Ceremony and learned the symbols of the award. Surrounded by Eagle Scouts, past and present, Classic Rock was emotional and stoic all at the same time. The various portions of the Ceremony were read by Eagle Scouts of his choosing - his Scoutmaster, two fellow Scouts, Scout fathers, a very close family friend, and his own father.

Classic Rock opted to receive his award at the Troop's annual picnic and Court of Honor.  The local Rotary Club that supports the Troop was in attendance and the Scouts cooked all the food as a thanks to the Club, family members, and friends that continually encourage and support them.  The Court of Honor began with the crossover ceremony of a Cub Scout into the Boy Scout Troop, continued with the awarding of merit badges and ranks earned by the Scouts, and ended with Classic Rock's Light ceremony and Eagle Award.  Watching the full spectrum of growth for these boys was so very moving and empowering.  Their Troop is strong in character and awash in brotherhood.

As the Scoutmaster gathered everyone for the start of the Court of Honor, the older scouts seemed to be missing.  We finally found them gathered in one of boat sheds, celebrating Classic Rock's 15th birthday which fell on the same day - they sang and it was hilarious.  He has found a solid foundation for friendship in these fellow Scouts and Venture Crew members. 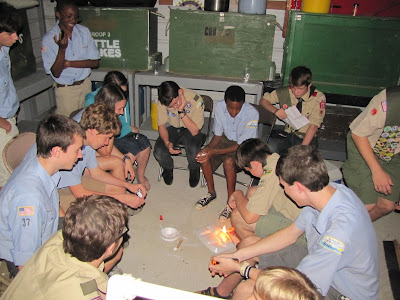 That's him running out of frame on the right!

I previously wrote about his Eagle project for our YMCA in this post.

Today's post title from Sanctus Real's Lead Me.  When I asked Classic Rock for the one word that summed up Eagle for him, his answer was leadership.